Vacuum Salesman
Leader of The Gingers

"The Trial of Cooper"

Ben Lepley
The Salesman is a major character from Ginger Orphan Playhouse. He is a former door-to-door vacuum salesman, who was trapped in Madame Trinkett's basement 23 years ago and has now made himself into the self-proclaimed leader of the "Ginger Club".

The Salesman was born as the child of an unnamed vagabond man and an unknown woman. His father used to mop the floors of the boxcars that they traveled from place to place in and his son would copy him, as retold in "Lil' Mitts Come Home". They two lived a happy life together until one day, his father sold him to Carlos T. Nice Orphanage so he could have enough money to buy another mop, as retold by his father in "The Trial of Cooper".

Little to nothing is known about The Salesman's life during the massive gap between this traumatic childhood experience and his life as a 23-year-old man other than the fact that he would eventually grow up to become a door-to-door vacuum salesman. In "The Roots of Coincidence", The Salesman went to Madame Trinkett's house, shortly after the death of her husband and tried to sell a vacuum to her. Madame Trinkett was completely naked, with only a bunch of parrots covering herself up. Shocked upon seeing her like this, The Salesman got ready to leave before Madame Trinkett darkly told him to shut the door. The Salesman started to think this meant he was going to have sex with her, so he excitedly shut the door and got ready to get busy. Madame Trinkett suddenly started retelling him the events of her husband's death and explained how she installed a basement in her living room just to store all of the things he brought back and that now it was worthless.

"It's easy to get down in the basement. You're underground. You're already half there."

"There's a song in all the hearts of those with ginger hair."

"The basement is great." 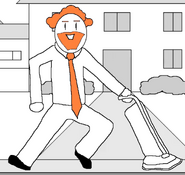 A young salesman, 23 years ago.
Community content is available under CC-BY-SA unless otherwise noted.
Advertisement